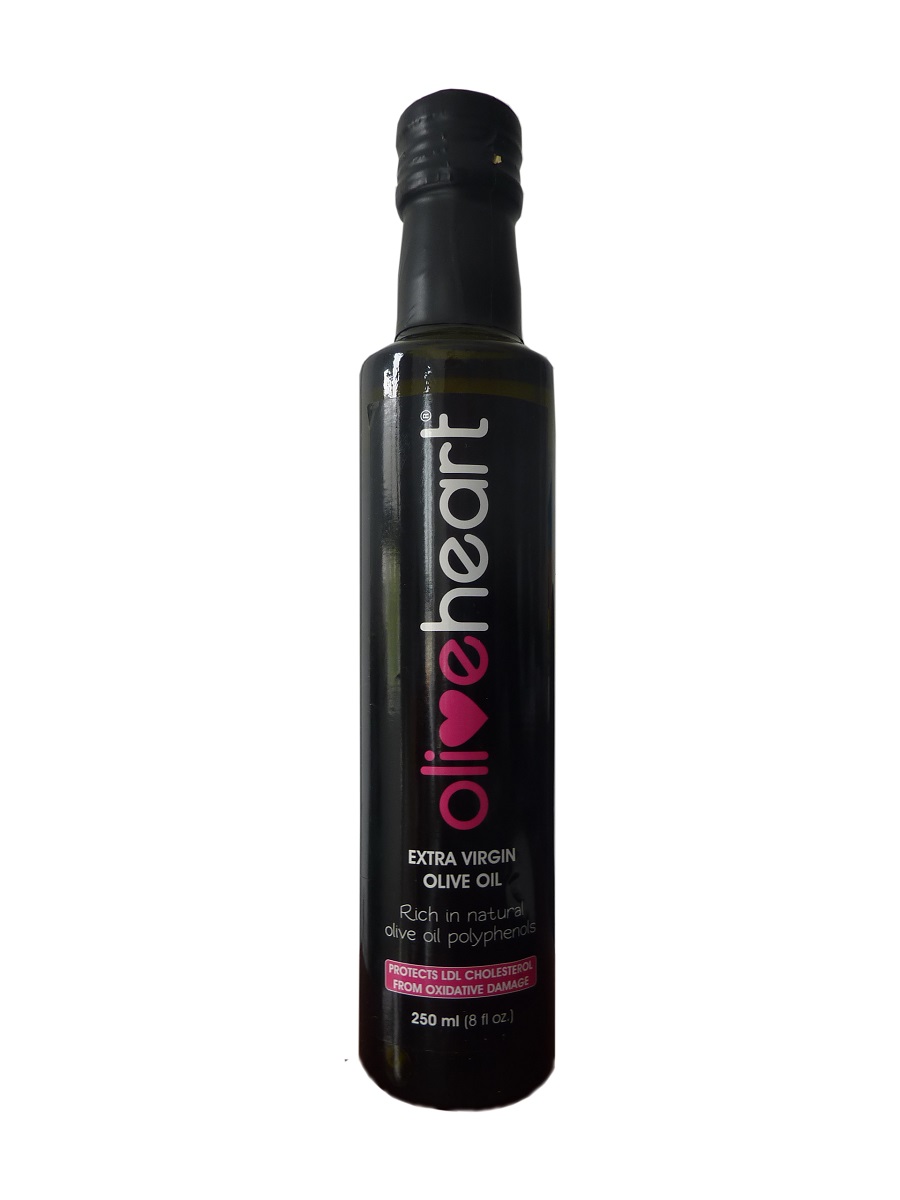 Contains high concentrations of antioxidant Hydroxytyrosol (5 mg per 20g). Hydroxytyrosol is the major and most active ortho-diphenol, as a free radical scavenger, the most powerful antioxidant that is highly bio-available and well absorbed by the human body. It has been scientifically proven that olive oil polyphenols help protect blood lipids from LDL cholesterol oxidative stress.

Using:
OliveHeart® has been designed to enjoy its fruity taste at any time with meals, toasts, bread, salad, etc. Ideal for adding to salads, prepared foods, or just take in and so on.
22 ml of OliveHeart® contains 5 mg of olive polyphenols.
22 ml is a sufficient dose for adding to a couple of slices of bread or a salad.
22 ml is the optimal daily dose to get an advantage.

Not meant for frying!

Storage: in a dark, cool place.

According to the European Food Safety Authority (EFSA), olive oil polyphenols contribute to the protection of blood lipids from LDL cholesterol oxidative stress.
This claim may be used only for olive oil which contains at least 5 mg of hydroxytyrosol and its derivatives (eg. oleuropein and tyrosol) per 20g of olive oil. In order to bear the claim, information shall be given to the consumer that the beneficial effect is obtained with a daily intake of 20 g of olive oil. OliveHeart® possesses such level of polyphenols.

To benefit, 22 ml per day of OliveHeart® would be an optimal dose.
It is not frequent to find such high levels of polyphenols naturally in olive oil. It depends on the variety, moment of harvest, weather conditions, collection and processes, preservation criteria, etc. OliveHeart®’i is produced by combining a variety of first-class Spanish olives and using specific growing methods.

OliveHeart® guarantees the optimum level of polyphenols during its shelf life, under adequate conditions of conservation. Analyzed by expert official centers.
The Mediterranean Diet, including Extra Virgin Olive Oil, prevents from the appearance of cardiovascular diseases (cardiovascular death, myocardium infarct nd/or stroke) in comparison with low-fat diets.
Extra Virgin Olive Oil is characterized by its high oleic acid composition, but mainly by the presence of minor compounds with an enormous value, known as polyphenols. It is one of the keys of Mediterranean Diets and the antioxidant essence of virgin olive oil.

There are no reviews yet.

Our passion for organic products, pure food and a healthier way of life began a long time ago. We have our own experience that the right foods can treat you and keep you healthy.
Home
Blog
About Us
Contact Us
Shop
How to purchase
Delivery conditions
Security and privacy
Return conditions
Contact
Whole sale